or Not 18+
Hunters and Frankau 225th Anniversary - Havana Cigar Exchange

To mark Hunters & Frankau’s 225th Anniversary, the company is offering a very special Havana cigar and a commemorative humidor.  Just 50,000 of the cigars have been produced in numbered SLB boxes of 25.  Both the cigars and the humidor have been created to reflect the company’s long history in the Havana cigar trade.
The Brand

Hunters and Frankau chose Ramon Allones as their celebratory cigar because of its particular association with the Hunters side of the company.  In 1911 John Hunter, Morris & Elkan Ltd, as it was then known, bought the brand’s factory in Havana along with its worldwide trademark rights.  Hunters and Frankau were privileged to own the brand for sixteen years until 1927 it was sold to the Cuban owners of Partagas whilst retaining the rights to Ramon Allones in the United Kingdom.

All the Hunters & Frankau Aniversario 225 cigars were made at the Partagas factory in Havana, the home of Ramon Allones since 1927.
The factory and Habanos S.A. has undertaken to produce a unique vitola for this anniversary based on the Gordito size, but with a “Cabeza Tumbada”, or “Dropped Head”, typical of the shapes that were made during Hunters and Frankau stewardship of the brand. 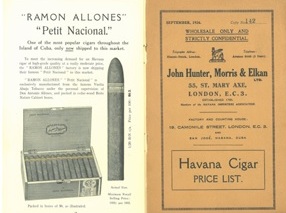 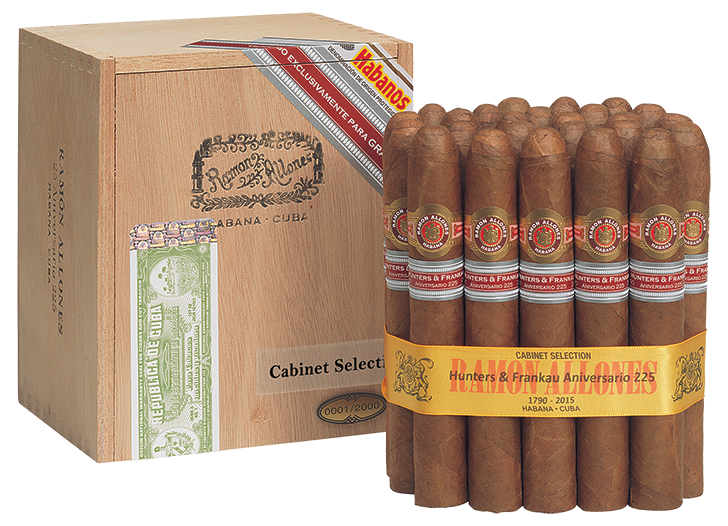 The Blending, Making and Ageing of the Cigars.

Master blender Arnaldo Vichot, pictured here with Jemma Freeman the CEO director of Hunters and Frankau at the Partagas factory, created the rich mixture of leaves  for the cigars.  Two different blends were submitted to a tasting panel in Havana back in November 2012 at which Jemma was also present.  Once the final blend was chosen, production of all 50,000 cigars took place between February and June 2013 and was undertaken by just three top grade torcedores.
In the traditional British manner, the cigars were then shipped to the UK and aged for a period of two years in Hunters and Frankau's condition-controlled warehouse so that they would be fully matured before being released to the market.
The Commemorative Humidor & 225 Anniversary Rum by Havana Club 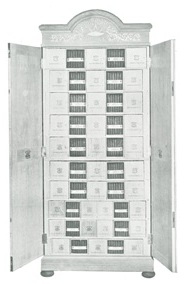 In days gone by it was customary to buy Havanas in cedar cabinets containing anything from 100 to 10,000 cigars, or more. They were much in vogue between the 1880s and the 1940s. This type of presentation gave rise to the expression “Cabinet Selection”, which came not only to describe the Habanos of exceptional quality that were selected to fill them but also the Slide Lid Boxes in which they were shipped.

To commemorate Hunters and Frankau Anniversary, they commissioned two hundred and twenty-five, numbered replicas of this style of presentation each containing four boxes (100 cigars) of the Ramon Allones Hunters & Frankau Aniversario 225.

The cabinet, every one of which is personally signed by Jemma Freeman, is equipped with two Xikar Crystal humidifiers and comes with one hundred commemorative cigar spills.  The lid at the top lifts up to reveal a humidified compartment for dispensing single cigars topped with a ceramic plaque on which the Ramon Allones insignia is emblazoned.

Each humidor is delivered with a complimentary 50cl bottle of very special rum prepared by Havana Club’s master blender Asbel Morales to marry with the taste of the cigar.  Also called the Hunters & Frankau Aniversario 225, Havana Club supported the celebrations by producing 500 numbered bottles of this precious spirit from selected vintage casks.  None will be for sale, but if they were, the value would be some £300 per bottle. The final selection of the rum to match the cigar took place in November 2014 when Jemma Freeman travelled to Havana with some of the Aniversario 225 cigars that had already benefited from some eighteen months of ageing in England.  Commenting on the pairing Morales said, “I’m defending my rum’s notes and the cigar is defending its notes.  They should not mirror each other, nor contrast too much.  It’s like a perfectly balanced marriage.”

Also present was Odelaine Paneque, the head taster at Partagas.  It is a rare event for the catadores (tasters) at Havana’s factories to light up a cigar that they last smoked a year and a half before.  She was very impressed with the way in which the cigar had retained its strong flavour and had gained a perfect balance between its aroma and its strength whilst losing its early aggressiveness. The manufacture of the humidors

The humidors were manufactured by DeART S.r.l. situated in Calvenzano near Milan in northern Italy.  Massimo de Munari, whose family owns the company, has built an enviable reputation over the last five years for making exceptional humidors, which he has supplied to many clubs , restaurants and private homes in Britain.

DeART’s skills in making fine furniture of the highest quality left us with no doubt that Massimo and his team were the right people to make our humidors.  The project started in the summer of 2013 and since then has been through many phases of prototypes and design changes to reach the finished product.  Manufacture commenced in January 2015 and the humidors were delivered at the end of March.

Jemma Freeman paid a visit to Italy during the production run and was able to witness the extraordinary care and attention to detail that went into the humidors; a fitting compliment to the quality of the cigars that they will contain.
Monday 22nd June 2015 is the day when the Ramon Allones Hunters & Frankau Aniversario 225 cigars and the Commemorative Humidors will be released for sale to the UK cigar trade.
Tweet Share Pin It Add Email